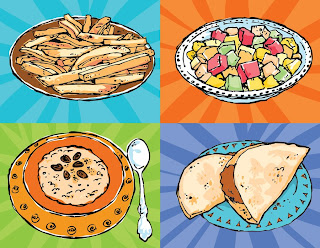 These were done for a job — a booklet of recipes for kids. They had to be done fast, and were meant to be very loose and colorful.

I did them in Illustrator with additional fiddling around in Photoshop.
Posted by Chrissie A at 6:53 PM 2 comments: 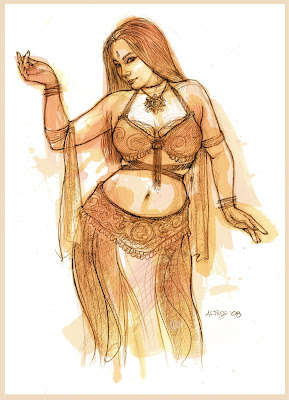 Photo reference by Desiree of deviantART.
Posted by Chrissie A at 5:58 PM 4 comments:

I don't know how, but I managed to get something in Volume 1 of Eye Candy from Strangers, so I'm kind of jumping for joy. :)

(I've vowed to submit better stuff for the next volume...I do feel like I've improved greatly since I did that little belly dance piece way back in early '07.)

Anyway, both of these fabulous books are produced by the amazing Alberto Ruiz--go check out his blog right now -- and his Brandstudio Press publishing company.

Alberto is a terrific artist and a real supporter of artists as well. I give him a lot of credit for inspiring me to get back to drawing and painting and starting my own blog a couple years back.

Both books are incredibly inspiring, not to mention beautifully printed and bound. Highly recommended! Go buy 'em!
Posted by Chrissie A at 10:34 AM 5 comments:

More Modesty B . . . plus a drawing jam sketch 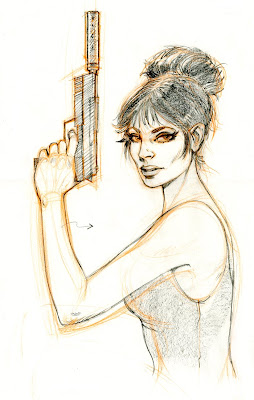 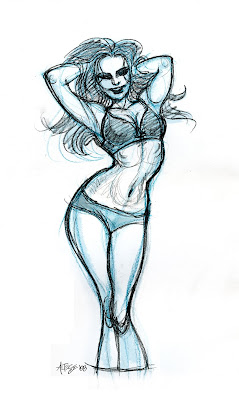 Sums it up nicely for me

First time I've ever even considered posting something un-art-related here. But I'm fed up, and this says it all.

Someone tell me, please, how grown men in 2008 can believe it’s their right - their duty, even - to tell a woman when she should rein in her ambition and go home.

Male columnists, male politicians, male talking heads, male “surrogates” - all of them harrumphing that it’s time for Hillary Clinton to stop it, just stop it, with all this talk of being president.

Who cares if the race is close? So what if millions of Americans believe their yet-to-be-cast votes matter? Voters, schmoters. When was this ever about them?

Hillary Clinton, they insist, must quit.

Well, boys, you’d better sit down for this one: This is no longer the playground of your youth. The girls aren’t sitting in the stands keeping score and cheering whenever you’re at bat. In fact, the girls aren’t girls at all anymore. We’re all grown up, and we are so done with this notion that the trajectory of our lives must end at the border of your comfort zone.

Hillary Clinton marched across that border miles ago, and she is not about to surrender. Not now, anyway, and not ever because you said so. And if you’ve got anything besides hubris knocking around in those heads of yours, you will take note of the potential backfire in your volley.

She supports Barack Obama, but the thought of finger-wagging men telling a woman what to do really set her off. She might change her vote, and anyone reading some of the comments on newspapers’ Web sites and blogs knows she’s not alone.

I’m thinkin’ that’s not where you fellas were going with this one. But I also think I can help.

The problem here is that you don’t understand the tenacity of American women.

It’s not all your fault. Your history books were full of tales of manly men beating each other up and then taking the livestock and womenfolk as prizes. Frankly, you were misled.

You didn’t learn about how women risked their lives birthing babies in open fields and harboring escaped slaves on their flight to freedom. You probably didn’t spend much time on how Alice Paul and her fellow suffragettes were tortured in prison because they dared to picket for the right to vote. And chances are you’ve never cracked the spine of the book “Women’s Letters: America From the Revolutionary War to the Present” by Lisa Grunwald and Stephen J. Adler. If you had, you would have seen the letter Abigail Grant wrote to her husband, Aszariah, in 1776 after she found out he had been less than heroic in the battle at Bunker Hill.

“Loving Husband,” her note began. “I hear by Capt Wm Riley news that makes me very Sorry for he Says you proved a Grand Coward when the fight was at Bunkers hill & in your Surprise he reports that you threw away your Cartridges So as to escape going into the Battle. . . . [I]f you are afraid pray own the truth & come home & take care of our Children & I will be Glad to Come & take your place, & never will be Called a Coward, neither will I throw away one Cartridge but exert myself bravely in so good a Cause.”

See, that’s the thing. You’ve got to remember that there’s a bit of Abigail Grant in a whole lot of us women. Granted, we hide it well. Most women are all fervor and no fanfare, running everything from companies and campaigns to families and food drives without so much as a plaque with their names on it at the end of it all.

We’re full of fight, too, which is the only way we got the vote, the pill and the right to own property, as opposed to being property. We don’t beat our breasts and brag about this, though, which appears to be part of the problem. Some men apparently still confuse humility with acquiescence, and then they think we need their permission to make a difference.

One mile at a time, Hillary Clinton is clearing a new road, taking hits for the rest of us along the way.

“It feels so personal,” another friend, Mary, told me. “Whenever I hear men bash Hillary, it feels like they’re attacking me.” 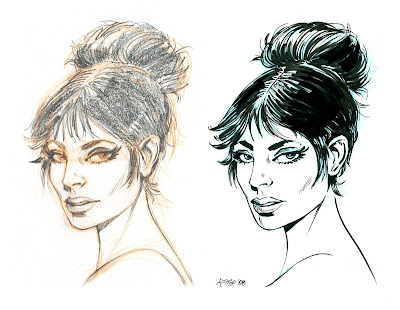 My homage to Enrique Romero, who drew the Modesty Blaise strips for many years.

I admired his wonderfully bold brush strokes and exotic depiction of Modesty, even as I took issue with some of his odd proportions and his frequent drawing of her face as slightly cross-eyed.

Anyway, I actually learned a lot from doing this. Really examining every brush stroke and squiggle in several of his works was useful--so different from the way I typically draw faces. I feel like I've added more tips 'n' tricks to my visual library.

People Who Inspire Me